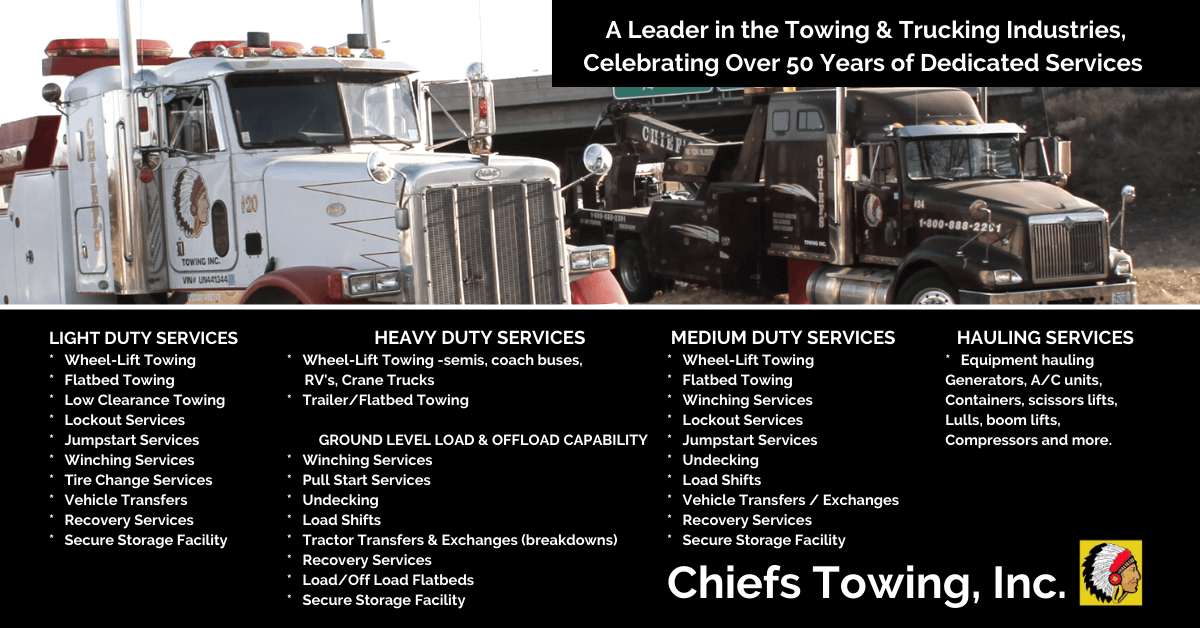 This towing, recovery, and transport company serving the Bloomington, MN area for the past 50 years – with loyal customers across the spectrum, from individuals to companies to municipalities and even the state patrol. Some of those customers have been with them for 30 years.

Chief’s Towing recovers vehicles and other machines that are disabled or just plain stuck. In their work with municipalities and police, they offer towing and storage services to keep vehicles safe after they’re impounded or removed from public spaces where they might become a hazard to others.

While Chief’s Towing is intimately familiar with the cash ebbs and flows that happen with a seasonal business, nothing could prepare them for what would happen with the COVID-19 crisis. We sat down with Chief’s managing director Jeffery Schoenborn to talk about how the pandemic affected Chief’s Towing and his experience with combatting those effects with a PPP loan through 21st Century Bank.

The COVID-19 Impact on this Minnesota-Based Business

As a pandemic began its sweep across the US, many states took steps to keep their residents safe and healthy. Minnesota was one of the states that shut down. This meant that roughly 80% of employees across the state were able to work from home, greatly reducing the amount of traffic on the roads and, as a result, the number of people being pulled over, accidents happening, and car dealerships limiting business.

Plus, since many businesses were shut down or running on skeleton crews, transport business was down, too.

“In terms of dollars and cents, it was a big hit,” says Schoenborn. “Business slowed down a lot and we had to lay off seven people.”

Since that initial downturn, things have picked up for Chief’s Towing. They’ve brought their seven laid-off employees back to work and are bringing in business close to the volume they hit pre-pandemic, putting them back at 20–35 employees, depending on the season.

Weathering the COVID-19 Pandemic, Together

Schoenborn and Chief’s Towing weren’t strangers to 21st Century Bank. In fact, they’d been working with our organization for five years prior to seeking a Paycheck Protection Program loan after following Paul Poncin, 21st Century Bank’s VP Commercial Lending, from his previous bank where they had been with him for about six years.

Schoenborn said at first he wasn’t sure he would need a PPP loan, though that quickly changed, as it did for many businesses during the pandemic. “Some bills just had to be paid,” Schoenborn says. “And we had to pay the staff. We couldn’t just drain our coffers to nothing and hope we got it back after the economy bounced back.”

Chief’s Towing started feeling the effects of COVID-19 in early March and were ready to apply for a loan as soon as they were officially available.

When business started slowing, Chief’s Towing reached out to lenders, seeking deferred loan payments or making agreements to pay just interest. But they still need to be able to pay utilities and employees. That’s where the Paycheck Protection Program loan came in.

Chief’s Towing was with a big bank for a long time before working with 21st Century Bank and were prepared to have to jump through the hoops they’d come to associate with a business loan application. They were pleasantly surprised at the 21st Century Bank process.

“21st Century Bank made it easy to get a loan. They answered all of our questions, and I exchanged several phone conversations and emails with Paul Poncin,” says Schoenborn. “It was hassle-free.”

For his part, Paul Poncin of 21st Century Bank enjoys having Chief’s Towing as a client. “They’re an old school, ‘my word is my bond’ kind of business. If they say something, they mean it, and they’re going to follow through on it,” Poncin says.

As they come upon their 50th anniversary, Schoenborn often reflects on what he’s most proud of with Chief’s Towing: its integrity. Chief’s Towing values its customers and employees alike and works to build and maintain relationships with both.

Schoenborn recalls a recent incident in which a new employee’s car was stolen. He called in and told them what happened and Schoenborn told him to get a ride to the office and they’d loan him a vehicle for a couple of days.

The new employee was stunned and appreciative. Schoenborn told him, “With a big business you might not get that. They’ll say ‘show up to work or you’re fired.’ At Chief’s Towing we understand that things happen and we’re a small enough company we can work around a situation whether it’s a daycare issue or a car gets stolen.” It’s this very attitude that keeps staff sticking around. Most of the staff at Chief’s Towing have been with the company anywhere from 5–20 years.

That small business feel is something both Schoenborn and the rest of Chief’s Towing appreciate. And the loan helped them get through some really hard times without having to go back on their small business values or liquidate the cash reserves of the company. To top it all off, it gave them peace of mind.

“Chief’s Towing is a great example of a company that really needed a PPP loan but didn’t think they needed at the time,” says Poncin. “Who can see into the future? It turned out to be a blessing for them.”

PrevPrevious2020: YEAR IN REVIEW
NextElement Indoor Golf Club Gets Out of the Rough with the Support of a PPP Loan – Through 21st Century BankNext