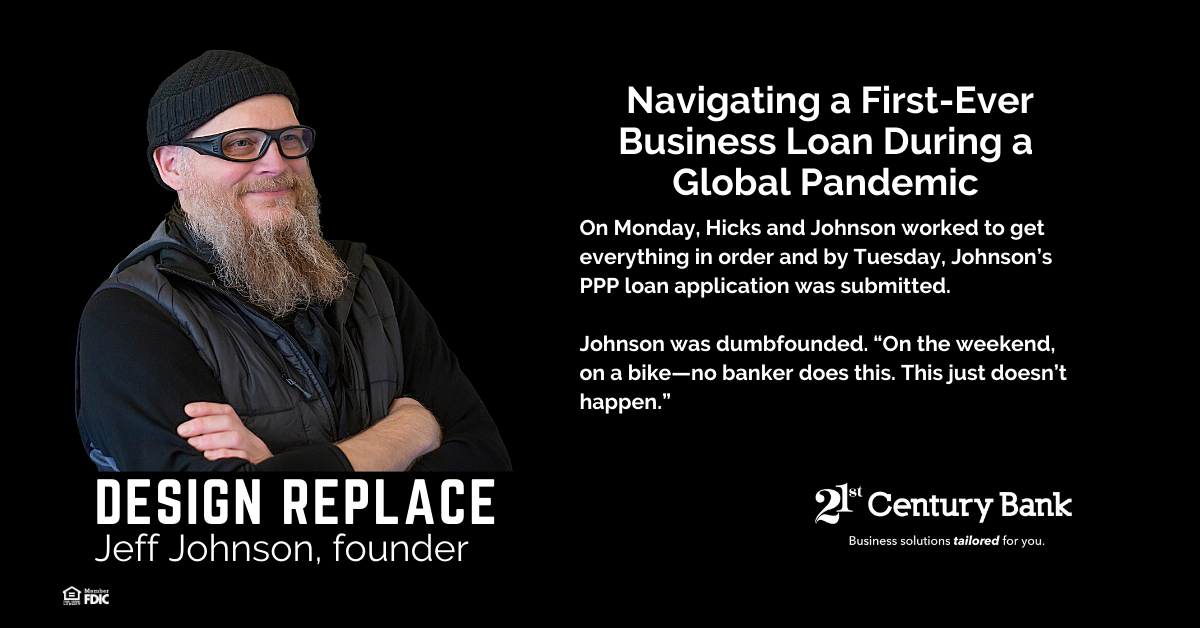 Like many of our customers, Replace found itself in a position where it needed a PPP business loan amid the pandemic.

The first thing you’ll probably notice about Jeff Johnson, founder of Replace, is his beard. The second thing? His heart.

Johnson was born in rural North Dakota, a farm kid who operated heavy equipment. He attended art school at Minnesota State University Moorhead, earning a B.F.A. and graduating with honors. Upon graduation, Johnson moved to Minneapolis to work for Duffy Design and Fallon Worldwide, moving up the ranks from intern to design director in a mere six years. After leaving Duffy, Johnson ventured to New Zealand to become a senior designer for Designworks before returning to Minnesota to found Replace in 1999.

Johnson started at Replace because he wanted to work with the “good guys,” those who have a better world vision with a triple bottom line view of the world: financial, social, and long-term ecological. Replace seeks out clients that are effecting positive change and are socially motivated.

And for 25 years, things have been going very well.

Replace is unique to its competitors thanks to a unique ability to be both very good and very fast without carrying a ton of overhead expenses. Where competitors might charge $100,000 to $500,000 for a project, Replace might be able to do that same project for $50,000 simply because, in Johnson’s words, “Replace doesn’t have a $10,000 couch and drives a 2007 Dodge Caravan as opposed to a Maserati.”

After so many years of bootstrapping and operating his business debt-free, Johnson was caught off guard when COVID-19 struck. After spending 2019 reinvesting in the company, suddenly nothing was happening. Existing business wasn’t moving forward, and new business just wasn’t coming in.

“The pandemic couldn’t have happened at a worse time,” Johnson says. “We’d staffed up in 2019 and early 2020, moving to seven contractors and two full-time employees, and we’d just bought a bunch of new equipment. We’d had a pretty good 2019.”

When COVID-19 hit, Replace’s business ground to nearly a halt. Despite successfully pulling through recessions in 1992, 2001, and 2008, this pandemic was causing some unique challenges. “All business across all sectors—medical, restaurant, entrepreneur—went flat,” Johnson recalls. “We had just invested money on payroll, equipment, and expansion… and then nothing.”

Since Johnson and Replace have been banking with a large, corporate “big box” bank for the past 25 years, Johnson tried getting a PPP loan for his business through them. It wasn’t as easy as he’d hoped. “I literally called 100 times to different phone numbers. My branch next door to me was closed, so I called the Chicago office, the New York office, the Minneapolis office, emailing and leaving messages. I couldn’t get them to return a phone call. And I really tried. But they were doing what they do—giving their money for PPP loans to larger clients,” he said.

So, Johnson tried another bank and was approved for a $25,000 PPP loan. Only they wouldn’t close on the loan because Johnson’s driver’s license was expired, and the bank wouldn’t accept his passport instead, even after U.S. Congressman Dean Phillips, a friend, and client of Johnson, contacted the bank on his behalf.

Johnson turned to social media, sending out an “SOS” to his network. Ben Levitz of Studio on Fire, a printing and packaging studio in St. Paul, answered the call. Levitz told Johnson that he’d been working with John Hicks at 21st Century Bank and encouraged Johnson to reach out.

Securing a Paycheck Protection Program (PPP) Loan at Twin Cities-based 21st Century Bank Johnson sent Hicks a text early on an April Saturday morning. Within half an hour, Hicks had responded that he was on a bike ride but would contact Johnson in an hour when he was done. And Hicks was true to his word, getting back to Johnson and asking for his loan documents.

Since Johnson had already been through the process with another bank, he had all the paperwork ready. On Sunday, Hicks reached out and said the words Johnson was longing to hear: “I think we can help.”

On Monday, Hicks and Johnson worked to get everything in order, and by Tuesday, Johnson’s PPP loan application was submitted.

Johnson was dumbfounded. “On the weekend, on a bike—no banker does this. This just doesn’t happen.”

Johnson’s difficulty in getting a PPP loan with big-box banks is one that 21st Century Bank has seen play out for many people coming through their doors. When asked how 21st Century Bank was able to work so quickly to help Johnson and Replace, John Hicks, SVP Commercial Lending at 21st Century Bank, had this to say: “Having the green light to be proactive with PPP loans was critical. We were empowered to help customers, and prospects got in line for the funding and weren’t waiting for direction from a large corporate office. We were able to make sure we had the bandwidth to take on customers and non-customers for the loans.”

The $25,000 PPP loan helped Replace bridge the gap to the next month when they shifted focus to designing and selling face masks to make up for lost revenue. That, in turn, helped them get through to the next month.

Replace used their PPP loan for payroll. One of the full-time employees had been on staff for 13 years, and Johnson desperately wanted to keep him. The PPP loan helped Johnson keep the core of the company alive so they could live to the next day. It gave them the cushion they needed to stay afloat long enough to find additional sources of revenue, make deals, change their billing structure, and cobble the pieces together.

And then the protests started. Replace boarded up the front of their studio like many other businesses in the neighborhood. Johnson spent his days feeding and watering protestors while spending his nights trying to convince people not to burn the building down. It didn’t leave much time to get any work done.

Since then, they’ve been able to drum up business from around the country to get them through. The benefit of Replace is that it’s an infinitely expandable business—you just have to find out where the work is. “But no exaggeration saying that Century Bank saved the company,” Johnson says.

Applying for the PPP loan was Johnson’s first interaction with 21st Century Bank. “They understand the extraordinary circumstances. The federal government did what they did [for COVID-19 relief], but so much of that aid was slanted towards Goldman Sachs and hedge funds and the people who have full-time accountants and MBAs… and that’s not small businesses.”

Johnson admits that he barely has the words to say how great it was to have 21st Century Bank, a bank focused on helping small businesses. “Small businesses are the economic engine of the world, and this is a time when the federal government failed. It was places like 21st Century Bank that kept [small businesses] going,” Johnson says. “There’s more at stake here than a small design company in Minneapolis. Real acts of everyday heroism are taking place, and John Hicks is a great example.”

“I get misty thinking about what Century did to save the company because they truly did,” Johnson says.

PrevPreviousJCD Promotions: How a PPP loan moved this small business to expansion
Next2020: 21st Century Bank’s Year in ReviewNext