Top scams that target seniors and how to avoid them 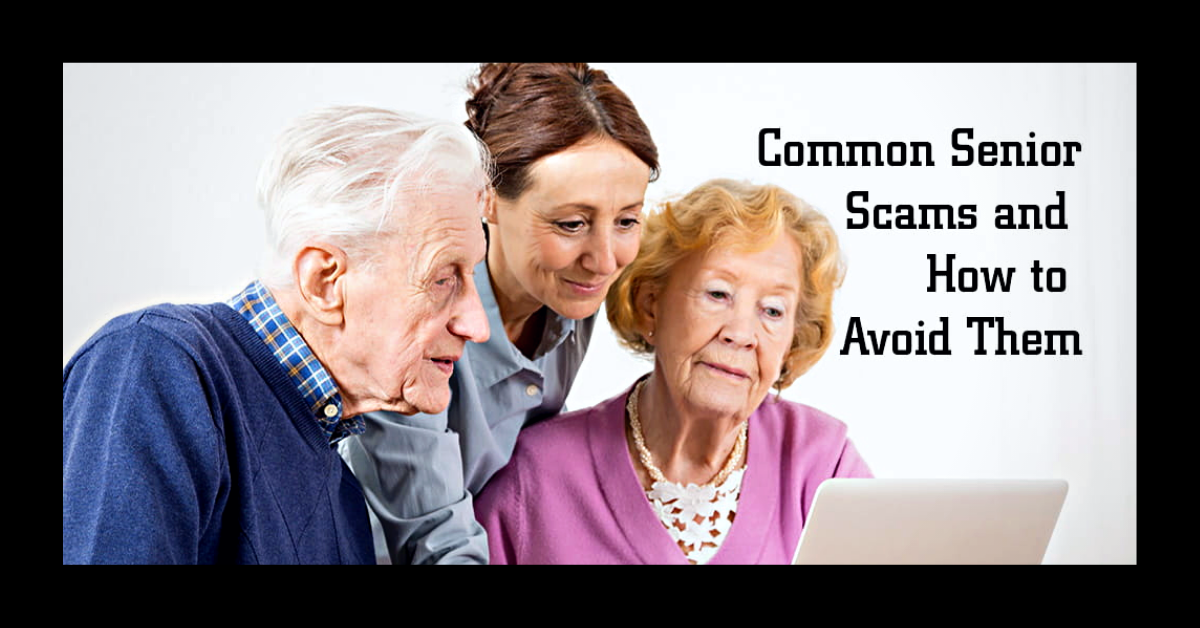 In the community, con artists create devious schemes to prey on their accumulated wealth.

Senior citizen scams have long been an issue, but the pandemic has only made those living their golden years more vulnerable and easier prey for fraudsters.

“According to our research, social isolation is a key risk factor for susceptibility to scams, as is financial vulnerability…add increased time spent online and coronavirus creates the ‘perfect storm’ for scammers because all three of these factors have increased dramatically,” says the Better Business Bureau (BBB) in a 2020 statement.

A report by the BBB showed that seniors aged 65 and over lost a median of $350 in 2020 due to falling victim to scammers — more than double ($160) the median loss across all age groups.

Here we will look at several common scams aimed at seniors to separate them from their hard-earned money or steal their identities.

According to Tod Burke, former associate dean and professor of criminal justice at Radford University in Virginia, senior citizens are most vulnerable to health care scams. Burke says scammers will call health care or Medicare representatives to access seniors’ personal or contact information.

They will use their contact information to call seniors back later and say they spoke with their daughter, son or other relative and that giving them Social Security numbers, driver’s license numbers or additional personal information is OK. Scammers might also offer help getting seniors medical insurance.

According to the National Council on Aging, they often use the personal information they provide to bill Medicare and pocket the money.

Burke says that scammers will call seniors pretending to be grandchild or great-grandchild and try to get money. Before paying them, make sure the person is an actual relative.

A scammer will place a call to a senior citizen, and when the mark picks up, the fraudster will say something like: “Hi, Grandma. Do you know who this is?” When the unsuspecting grandparent guesses the name of a grandchild, the scammer most sounds like the scammer has established a fake identity. Once they establish a relationship, they ask for money.

“They’ll know just enough information they get from Facebook and other social media websites, such as where the grandkids live, where they are vacationing or other personal details, and use this information to get (the senior) to open up,” Burke says. “If the scammer calls from a cellphone with bad reception or a Bluetooth, it’s not always easy to decipher and know it’s not the relative.”

The IRS stresses it never initiates contact with taxpayers via email about their accounts. If you have seen an email from the IRS or any company or agency requesting your personal information, delete it immediately — and do not click on any links.

If you feel uneasy, call your local IRS office or government agency on your own to see if they ever indeed contacted you.

Gideon Schein, a former partner with Eddy & Schein In-Home Administrators for Seniors, says seniors have to be careful, even with trusted professionals. He cites an example of a client paying tens of thousands extra per month to a financial advisor who had known the client’s father.

“My clients – George, a retired math professor, and Elaine, a homemaker – had their money with an institution for almost 20 years. I had been working for them for two years when their daughter called to ask me why her parents had spent so much money last year. I informed her that they did not. She then asked, ‘What have I been doing with $40,000 per month?’” Schein says. “I told her that I only got $20,000. Since the distributions were regular and sufficient, I had never asked to see a statement.”

It turns out that their financial advisor had been taking $20,000 out of the distribution for himself. This had been going on for years. Their advisor was convicted of fraud and embezzlement, but Schein’s company was able to recover 70 percent of the money taken.

Pay close attention to the money coming in and out of your investment accounts is always essential.

Because of the rising costs of some prescription drugs, senior citizens are going online to look for cheaper drugs. But these drugs can be counterfeit, making this scam extremely dangerous.

Or, in another iteration of the prescription drug scam, the fraudsters take the money without delivering the drugs.

“The same goes with some anti-aging products,” Burke adds.

Whether fake Botox or bogus homeopathic remedies, seniors are being targeted by fraudsters offering anti-aging products.

Burke advises seniors who are faced with dubious transactions or products to contact their local police department. Many police departments have a fraud unit. If not, they likely will refer them to the state police or FBI.

In the obituary scam, con artists read obituaries from the local paper, call the deceased relative’s family, and demand money for a supposed outstanding debt that the deceased left behind.

Another version of this scam is when fraudsters read the obituaries to pinpoint recent widows as targets. After identifying their next victim, a messenger arrives at the home of the recent widow with a cash-on-delivery package, claiming the recently deceased spouse ordered something and then demands immediate payment. After taking the money, the messengers are long gone before the victim realizes the box contains worthless old magazines or newspapers.

In this case, scammers identify targets and prey on them during a vulnerable state.

“Sometimes, when we are in a state of grief, we act quickly under all the emotions we are experiencing and do not think through the situation,” says Amy Nofziger, regional director with the AARP Foundation, which works with the AARP Fraud Watch Network.

Keep in mind that legitimate companies do not operate by intimidating or threatening you.

If someone calls unsolicited, stating they are from the bank and there is a problem with the account, hang up, Nofziger says. Then contact the bank using the telephone number from a bank statement to find out if there is an issue with the account.

“Do not give any personal or financial information over the phone to anyone requesting information about the deceased,” says Nofziger.

To prevent this kind of scam, pay attention to the information you put in the obituary — everything you publish will be public.

“Scammers will stop at nothing to steal from you, and they will use your vulnerability to their advantage,” Nofziger says.

Even some shady funeral homes have been caught doing dishonest business. Burke says they will have seniors buy the most expensive casket, even if they perform a cremation.

They will say things like, “You need this casket because you want to be able to remember them this way,” Burke says.

When going to a funeral home, it’s best to have all the questions you want to be answered written down ahead of time, he says. Seniors should give themselves time to do their research. Go with a family member or a close friend.

This scam involves fraudsters calling, emailing and even knocking on doors claiming to be from Medicare. The AARP says that the criminals will then offer health services only if you verify your Medicare ID number.

The scam began during the pandemic with fraudsters claiming to provide vaccines and other pandemic-related health services and continues to use the guise of seeking to help senior citizens with the intent to steal their identities.

The AARP stresses that Medicare will never contact you about your personal information without your permission, and if you believe you might have been the victim of this fraud, immediately hang up the phone, delete the email, or close the door.

Tech support scams typically begin with a call from a blocked or international number. Often targeting trusting seniors, the caller claims to be a technician certified by Apple, Microsoft or another major brand.

Using scare tactics, the scammer urgently claims that he has detected a virus or malware on the senior’s computer. The caller may even ask to take over the personal computer remotely to install software that allows him to assist. And to clean the PC and fix the problem, the scammer inevitably asks for payment of several hundred dollars via credit card or online payment. Resist, and the scammer may get angry and threaten to destroy the computer, according to a Microsoft blog post about the scam.

Of course, there’s no real problem with the PC. And nothing gets fixed.

Anyone can fall victim to this type of scam – not only seniors. Yet seniors have been some of the most vulnerable, Microsoft says in a blog post.

You might already be familiar with this scam, as it’s become relatively prevalent in recent years — a number from Washington D.C. calls you and claims your Social Security number was used in a crime. The fraudster then claims you need to send money to fix it; if not, the police will be after you in a couple of minutes.

“They may say your number was used to rent a car where drugs were found and that the Drug Enforcement Agency is on their way to your house,” AARP’s Nofziger says. Callers sometimes refer you to a local police department’s website where you can see the actual picture of the person allegedly calling you, leading you to believe it’s all-natural.

The Social Security Administration (SSA) will never call you demanding your Social Security number without prior contact through email, phone or written letter, especially for an emergency and will not send the police after you. If you believe you have been a victim of this type of fraud, you can call the SSA’s fraud hotline at 800-269-0271 or reach the Office of the Inspector General at ssa.gov/oig.

Offer in compromise (OIC) “mills” take out ads in local newspapers and media claiming they can settle people’s debt for “pennies” on the dollar, according to the IRS. In reality, the taxpayer usually pays the OIC mill a fee to get the same deal they would have gotten by working directly with the IRS.

The agency claims these mills are a problem year-round but more visible after tax season as taxpayers try to resolve their debts. The IRS claims that these fraudsters are offering to help taxpayers apply for an OIC, knowing they will never meet the requirements of the OIC.

An OIC allows taxpayers to come to a compromise on their debts — much in the same way credit card companies sometimes do. These offers usually stipulate that taxpayers will need to pay off the debt within a certain period, which sometimes reduces the debt, but other times does not.

The mills typically charge exorbitant fees, knowing that customers do not have the money to meet the program requirements.

Criminals have gotten increasingly savvy in conning unsuspecting seniors from their hard-earned money. It’s important to remember that government agencies and most companies will typically not contact you for your personal information without you knowing about it beforehand. By staying vigilant and knowing what to look for, you can prevent yourself and your loved ones from being taken advantage of.

— Ana Gonzalez Ribiero wrote a previous version of this story.

PrevPreviousWith Heartfelt Congratulations On Your Retirement!